There’s an ice cream shop in Denver, Colorado called Sweet Action Ice Cream that used to make this flavor. This is one strange combo, even for me, but how can I resist the challenge?! I was surprised how much I like this savory, sweet, and spicy flavor.

My first idea was to combine a honey flavored sweet cream base with chopped up dill pickles and jalapeños. Pretty straight forward. However, I was a little concerned about the pickles and jalapeños freezing solid. I also needed to figure out how I was going to impart a pickle and jalapeño favor to the ice cream itself. Then I remembered the new Philadelphia style low carb ice cream base that I created. It’s mostly almond milk, which is essentially water. I can substitute pickle juice for some of the almond milk. My first attempt involved a half cup of pickle juice and a whole fresh diced jalapeño added into the mix prior to heating. What was surprising about the result was that the flavors weren’t strong enough. I should have used pickled jalapeños instead. I was just about to buy a jar of them when I realized that they were going to be more trouble than they were worth. What I really need to use was pureed jalapeño, which is essentially hot sauce! I bought a bottle of Cholula green pepper hot sauce and dumped the whole thing into the mix. Yes, there’s sugar in the hot sauce, but it’s going to be a relatively small amount per serving of ice cream.

The acidity of the pickle juice and hot sauce will cause the dairy to curdle. The mix will have a slight texture of ricotta cheese after it’s been aged in the refrigerator. This is to be expected and doesn’t mean it spoiled. A little whisking before churning will smooth the lumps out and the ice cream dasher will take care of the rest.

I don’t mind the spicy heat this ice cream brings, but others may think it’s too strong. Try cutting  back on the hot sauce and make up the difference with almond milk or more heavy cream. The ice cream came out a little “dry” probably due to the whey and casein. I could try making this again using a cooked custard base instead, but I figured a Philadelphia style mix would allow the flavors to be bolder. 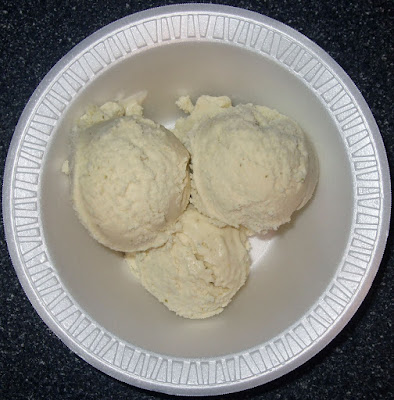 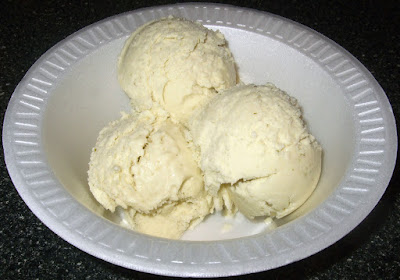 Posted by Gerard Pinzone at 9:25 AM