The Uncanny Valley of Bullshit

Have you ever heard of “the uncanny valley?” Do you know what it is? No? Well, then you’re not going to understand this blog post. Here’s a video on the topic:


I don’t know if it’s the best one that explains the uncanny valley, but it should suffice. Did you watch it? If you didn’t, you really should before proceeding. Ready? Great.

The Willing Suspension of Disbelief or Lack Thereof


Have you ever read a book or watched a movie that rubbed you the wrong way because of a plot hole or other kind of inconsistency? Sure you have. Maybe you even raised your displeasure to acquaintances. Rather than agree with you, they rebuff your criticisms especially if the story heavily involves science fiction or fantasy elements. “So you think Rey’s character is unrealistic because she seems to be instantly expert at everything she tries for the first time, but you’re totally okay with lightsabers and laser pistols that defy the laws of physics?” 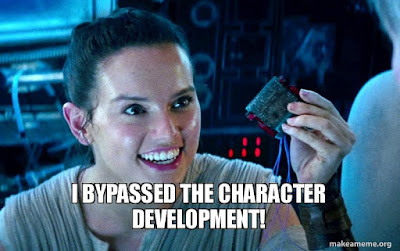 Why are we willing to suspend disbelief for some outlandish plot contrivances, but are bothered by others? Is there a pattern? I couldn’t put my finger on it until I thought about the uncanny valley recently.

The Oxymoron of Fiction: Believable Bullshit


“Fiction is the classification for any story or similar work derived from imagination—in other words, not based strictly on history or fact.[1]” We know fiction is not real, but it has to feel real in order for us to enjoy it. This does not mean a work of fiction must be completely scientifically accurate or realistic. (In fact, there are aspects of cinema that are unrealistic, but are done because viewers have been so conditioned to expect them that their absence would be even more jarring.[2]) Suspension of disbelief is based on humans’ perception of reality rather than reality itself. I propose that our suspension of disbelief is similar to our emotional response to anthropomorphism. In other words, there’s an “uncanny valley of bullshit.”


Humans have a pretty high capacity for bullshit. We love it, actually. The more bullshit you add to a story, the better. Bullshit makes things more interesting. Humans’ imagination is composed mostly of bullshit. Bullshit is magic and magic is bullshit. The best way to sell bullshit is to intertwine it with reality. You can’t shovel bullshit that’s completely abstract without any grounding in reality. That kind of bullshit isn’t palatable. We make our bullshit easier to swallow by making it seem more real than it is.

We know rocket ships exist. We know space travel exists. We know technology improves over time. Therefore, it’s not a huge leap for us to imagine an improved form of space travel in the future that will allow us to go to other solar systems and galaxies. Some wet blankets (e.g., physicists) will point out the annoying impossibility of faster than light travel and that it would take centuries to reach even the closest star systems. Feh! Most people don’t know that. Remember, suspension of disbelief is based on humans’ perception of reality rather than reality itself. Human perception of bullshit varies depending on individual’s background and knowledge. I may cringe at the lack of realism when watching a scene involving a computer, but don’t question how a boxing match with so many punches landed square to the jaw can continue for rounds and rounds.

The left side of the valley


Lightsabers are designed to look like tools that could conceivably exist with sufficient technology. They’re like heavy-duty flashlights that emit a controlled beam of energy. They make noise that our brains seem to associate with hot plasma cutting through the air (assuming that’s even a real thing.) The backstory of the Jedi knights mirrors that of ancient Earth and its lore of medieval warriors. That’s why most people can suspend belief regarding something as illogical as a lightsaber. 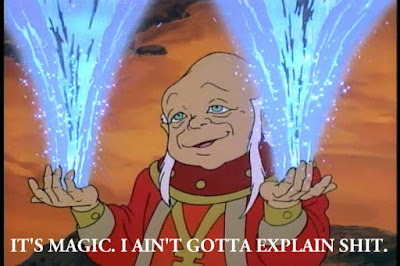 The right side of the valley


A movie like Apollo 13 is enjoyable because it nails not only the look and feel of the spacecraft, but the era in which the story takes place. The filmmakers simulated weightlessness in space by shooting scenes in a fixed-wing aircraft designed to make a zero gravity maneuver. This kind of film can be very difficult to pull off. There cannot be significant parts of the story or visual effects that seem unnatural. We know the actors weren’t actually filmed in outer space in the early 1970s, but the visual effects, wardrobe, and sets are so realistic, viewers are able to immerse themselves. The movie is based on real events. No matter how improbable the story seems at times, it doesn’t matter because it actually happened. “Truth is stranger than fiction, but it is because Fiction is obliged to stick to possibilities; Truth isn’t.” — Mark Twain, Following the Equator (1897), ch. 15.

Inside the uncanny valley


The most egregious inconsistencies are those that do not reflect the shared human experience. A (sane) character that acts illogically and unrealistically is not believable. It makes no difference if they are in outer space, in middle-earth, or standing on a street corner in present time. It’s far easier to believe in a person’s ability to wield magical powers than it is to accept a villain not simply killing a protagonist at the first opportunity. The magnitude of these imperfections may not be great in scale compared to other leaps of faith required to move the story along. This is why some people argue that these issues are just “nitpicks.” They may be small, but glaring due to their close proximity on the graph to what we consider logical and real.


Humans tend to insert themselves into the heads of the people or characters they’re analyzing. It makes no difference if it’s fiction or non-fiction. Jurors base their verdicts not only on the evidence, but on the state of mind of the defendant. Crimes of passion are handled differently than ones committed with malice aforethought. If fictional characters with human characteristics do not behave the way we would expect humans to act under similar circumstances, we lose our suspension of disbelief. Similarly, if well-understood laws of physics, simple cause and effect, and continuities are violated, our immersion into the story is threatened. Trivial imperfections become much more noticeable when they contradict the most obvious aspects of human life, knowledge, and logic.

Posted by Gerard Pinzone at 9:00 AM