Carbohydrate restriction has been identified as a preventative action and potential treatment for a variety of neurological disorders and weight loss. But if you guessed that’s the subject of this post, you’d be wrong. 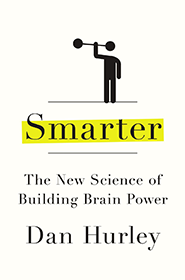 I recently read the book “Smarter: The New Science of Building Brain Power” by Dan Hurley. It’s an interesting tale of self experimentation to improve human cognitive function. The author reviews a number of methods such as mental training tasks, diet, and drugs and implements a few of them to see if his IQ can be improved through these means. You’re probably now predicting that I will be discussing his dietary findings as they relate to cognitive function, but you’d again be wrong. Instead, I’m going to focus on drugs; one drug in particular. I’m singling this one out because it’s controversial. Its infamy is due to guilt-by-association, kind of like saturated fat. You’d think this demonstrably effective, inexpensive, all-natural, non-habit forming drug would be getting more attention as a potential treatment especially for older folks at risk for dementia, but it probably won’t in my lifetime. It’s nicotine. The demon ingredient that is alleged to make people slaves to cigarettes may be more effective than prescription drugs.

Maryka Quik, director of the Neurodegenerative Diseases Program at SRI International, a nonprofit research institute based in California’s Silicon Valley has published dozens of studies revealing the actions of nicotine within the mammalian brain.1 The result has been has been skepticism and downright hostility from many of her fellow neuroscientists.


People can’t disassociate the two in their mind, nicotine and smoking. It’s not the general public that annoys me, it’s the scientists. When I tell them about the studies, they should say, “Wow.” But they say, “Oh well, that might be true, but I don’t see the point.” It’s not even ignorance. It’s their preconceived ideas and inflexibility.

Smokers have a well-established list of maladies associated with tobacco consumption. Cancer and emphysema are among two of the most prominent. However, one comes up with a negative correlation: Parkinson's disease. In fact, one study showed it occurred three time more often in nonsmokers than in smokers.2


What was it about tobacco that ravages the heart, lungs, teeth, and skin but somehow guards against a disease of the brain? Over the course of the 1970s, neuroscientists like Quik learned that the nicotine molecule fits into receptors for the neurotransmitter acetylcholine like a key into a lock. By managing to slip through doors marked “Acetylcholine Only,” nicotine revealed a special family of acetylcholine receptors hitherto unknown.

And what a family. Nicotinic receptors turn out to have the extraordinary capacity to moderate other families of receptors, quieting or amplifying their functioning. According to psychopharmacologist Paul Newhouse, director of the Center for Cognitive Medicine at Vanderbilt University School of Medicine in Nashville, “Nicotinic receptors in the brain appear to work by regulating other receptor systems. If you’re sleepy, nicotine tends to make you more alert. If you’re anxious, it tends to calm you.”

The primary neurotransmitter that nicotine nudges is dopamine, which plays an important role in modulating attention, reward-seeking behaviors, drug addictions, and movement. And therein lies the answer to the mystery of why nicotine could prevent a movement disorder like Parkinson’s disease, due to its effects on dopamine.

To put the drug to the test, Quik treated rhesus monkeys with Parkinson’s with nicotine. After eight weeks, she reported in a landmark 2007 paper in the Annals of Neurology, the monkeys had half as many tremors and tics. Even more remarkably, in monkeys already receiving L-dopa, the standard drug for Parkinson’s, nicotine reduced their dyskinesias by an additional one-third. Studies of nicotine in humans with Parkinson’s are now under way, supported by the Michael J. Fox Foundation.

Other research suggests the drug may protect against the early stages of Alzheimer’s disease. A study involving sixty-seven people with mild cognitive impairment, in which memory is slightly impaired but decision-making and other cognitive abilities remain within normal levels, found “significant nicotine-associated improvements in attention, memory, and psychomotor speed,” with excellent safety and tolerability.

“What we saw was consistent with prior studies showing that nicotinic stimulation in the short run can improve memory, attention, and speed,” said Newhouse, who led the study.

Perhaps what I found most shocking is that the use of nicotine patches by nonsmokers resulted in absolutely no withdrawal symptoms. “Tobacco use has one of the highest rates of addiction of any abused drug. Paradoxically, in animal models, nicotine appears to be a weak reinforcer.”3 It’s the addition of other ingredients in tobacco smoke like acetaldehyde, anabasine, nornicotine, anatabine, cotinine, and myosmine that makes tobacco so addictive. Nicotine on its own may not be terribly habit-forming.

Jennifer Rusted, professor of experimental psychology at Sussex University in Britain proclaims. “To my knowledge, nicotine is the most reliable cognitive enhancer that we currently have, bizarrely. The cognitive-enhancing effects of nicotine in a normal population are more robust than you get with any other agent. With Provigil, for instance, the evidence for cognitive benefits is nowhere near as strong as it is for nicotine.”4

I’m not suggesting we all stock up on nicotine patches and gum to ward off degenerative diseases like Alzheimer’s. Nevertheless, if I was faced with a loved one falling victim to such a debilitating disease, I’d be pretty damned angry if my doctor ignored treatment options based on stigma versus effectiveness.

UPDATE 2014-04-26: I contacted Maryka Quik about nicotine and its effects as an analgesic. She referred me to this paper on the subject: Smoking and Pain: Pathophysiology and Clinical Implications.

Posted by Gerard Pinzone at 1:15 PM